skip to main | skip to sidebar

The Physics and History Behind Buttresses

The use of buttresses dates back to as early 3,000 B.C. when they were used in ancient temples in Mesopotamia, but buttresses weren’t fully utilized until the Roman era. A buttress is an architectural structure built against a counter-fort or projecting wall, which serves to protect or reinforce the wall. Years ago, buttresses were fairly features of common castles, domes, churches, and arches. Since these structures were built primarily out of heavy stones, the weight of the arched or domed ceiling would buckle the walls outward. So, engineers began to pile large stacks of stones in intervals to buttress, or support the walls from pushing outward. These piles of stones became distinct features of Romanesque style churches and buttresses became part of their basic design.
Romanesque style churches tended to be large, castle-like structures with thick walls and small openings for windows and doors. These churches were usually quite small, rarely scaling more than 5 stories, so the buttress design was not too complex. Its main goal was to solidify the foundation of the structure. However, as Europe moved into the Dark Ages, buildings began getting larger and gothic cathedrals became very prevalent. These churches were built much higher than their predecessors, often reaching up to 200 ft. Since the stones to build them were considerably larger and heavier, buttresses were employed even more. In order to negate the outward thrust of the walls caused by the weight of the ceiling and force of the wind, buttresses were built to absorb this thrust and then transfer it to the foundation below. 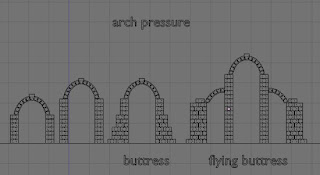 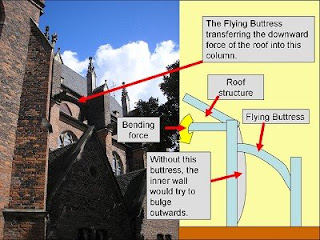 In modern day engineering, better reinforcement structures and increased knowledge of structural engineering, along with the emergence of building materials such as steel has limited the use of buttresses, but they are in no way obsolete. They will continually be an integral part of the design of many buildings, and provide a prime example of how structures may be reinforced using principles of physics and engineering.